Let’s talk Glow in the Dark Food and Drink.. Is there such a thing? But of course! And it’s pretty straightforward too.

Glow in the Dark Jelly

Lets start with every kids party favourite; Glow in the Dark Jelly. It’s as simple as; grabbing a pack of your usual supermarket Jelly, and substituting the water in the recipe for Tonic Water. Bobs your uncle, you’ve got yourself some glowing Jelly! How impressive is that? Tonic contains something called ‘Quinine’, which will make the tonic turn fluorescent under an Ultraviolet light.

Glow in the Dark Cupcakes

This is all in the frosting! So get baking your favourite cupcake recipe. When it comes to making the Frosting, use your usual recipe, but with an added little trick, Riboflavin and Neon Food colouring. Riboflavin also known as Vitamin B2 is often found in capsules, so just crush the capsules in your mix. The added Vitamin B2 will actually add some health support in your Cupcakes, so the Cupcakes aren’t all bad! Vitamin B2 helps the body to convert Carbohydrates into fuel, as well as metabolize fats and protein, as well as helping the nervous system function properly. So at least your sweet treats will provide the kids with some sort of health related goodness! Vitamin B2 or Riboflavin is really easy to come across, you can order some capsules online, or by visiting your local health store. Just click here to follow a simple Glow in the Dark Cupcake recipe.

So you’re lucky enough to have hired a Candy Floss maker, or you’re going for it and making your own. Fantastic! Well if Candy Floss isn’t bright enough for you already, why not add an extra little glow, and instead of your usual Candy Floss stick, go for a Glow Stick! The Glow Stick will shine through the Candy Floss, giving it an even brighter Glow!

Now lets not just make this party about the kids! We know you adults like to boogie on down too, so check out this little number. The world’s gone absolutely bonkers for Gin and we are just absolutely mad about this Glow in the Dark Gin & Tonic cocktail. It’s that good old Quinine in the Tonic Water that’ll glow under any UV light!

Glow in the Dark Ice Cubes

Why not get a little creative and make your own Glow in the Dark Ice Cubes. Just simply, mix water and tonic water in an Ice Cube Tray, stick it in the Freezer until completely frozen. And BAM, you’ve got yourself some fantastically glowing Ice Cubes to refresh and cool your drink. If you’re feeling a little less creative and want something quick, easy and ready to go, you could use some of our Blue Glow in the Dark Ice Cubes. They’re made from food-grade plastic and are totally-waterproof. Just press the button to select the mode; flash, quick-flash or static and then drop one into your drink! You could even take it to the next Glow Level, and enjoy your drink in one of our Flashing LED Cups with a Glow Straw! 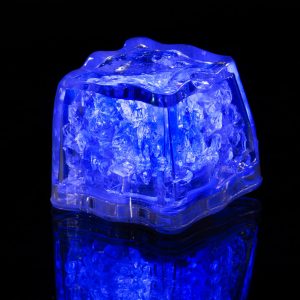 So the Glow is now in your hands, it’s up to you how creative you get with your food and drink delights.

It may be one of those trial and error to get the best flavour and glow, but the time and effort is certainly worth it for the effectiveness