Did you know that yesterday was the official first day of autumn?! But it’s not all bad, there are lots of fun things to look forward to; bonfires, Halloween, fireworks, and starry nights (to name just a few)!

The autumn season is the ideal opportunity to have fun with family and friends. The Glowtopia team  have spent a long time working out how to make this autumn awesome! Stay tuned for fresh ideas on how to brighten up your celebrations over the coming weeks, we are sure your family and friends will love what we have to offer!

And much, much more! 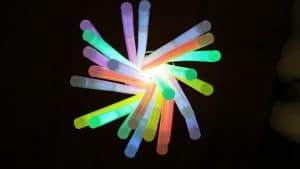 Woohoo! Summer is here and that can only mean one thing, wholesale glow sticks! Wait, what? We’re sure your first thought wasn’t to buy wholesale glowsticks, in fact, you’re probably already ripping mint for the mojitos and rinsing the barbeque down. Well let us just stop you right there, because you’re missing a stick, excuse us, trick, well actually, you’re missing out on both!

As we mournfully nibble the last of our Easter eggs, we look forward to a bright and glorious, scorching hot summer (we never said we weren’t dreamers). A summer which even with rain, and wind, and muddy grass will be filled with a ton of outdoor activities, festivals and camping galore.

If you’re in the business of:

Or you are pretty much running or organising anything where lights could be useful, fun or necessary in the dark, then it is time for you to think about bulk buying glow sticks from Glowtopia.

Getting The Best Price To Make The Most Profit

Soon enough glow sticks are going to be in high demand, it happens every summer and we want you to make the most of our cheaper than cheap wholesale prices, so you can make the most money when you’re selling out of glow sticks left right and centre this summer. We aren’t selective about our discounts either, no tricks or cheats here, we offer wholesale discounts on ALL our products. So whether you buy ten pairs of glow stick glasses, or 1000 LED flashing bunny rabbit ears, you can feel assured you are getting the absolute best price on your bulk buy glow sticks.

Meeting Your Needs All Day Every Day

You’re going to be selling out of glow sticks, no need to worry about that. No need to worry about stocking back up either though as we stock huge quantities of products so that we can offer next day delivery to you. We would never want to see a world where somebody wanted a bit of light in their life and they couldn’t get it!

Making It Your Own

Don’t worry about branding and packaging being specific to our brand, most of the products we buy are generic and unbranded in their packaging making them ideal for resale and totally ready for you to make them your own.

Whatever the event you are running this summer, we’re ready to help you bring a lot of light to it with our awesome, super affordable wholesale glow sticks. We’re excited to help you and your customers absolutely glow for it this summer!

Glow sticks have been a staple party accessory for decades now. No rave, festival or school disco is complete without adding a few light sticks into the mix. But have you ever thought about the science behind glow sticks? What makes glow sticks glow? What have they got to do with fireflies? And how come they’re the only source of light that’s safe to use in a catastrophe?

How is light made? Let me excite your atoms…

Light is made when an outside source of energy excites atoms and causes them to release bundles of energy called photons. 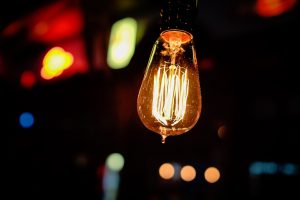 So, for example, when you switch a light bulb on, the electricity creates heat energy that causes the atoms to get all excited and speed-up. As they speed-up they collide with each other at a greater force, transferring energy to the atom’s electrons. The electrons are temporarily ‘excited’ to a higher energy level and as they return to their original level they release some of their energy in the form of light photons.

There are a variety of processes that can be used to create light, but the two you’re probably most familiar with in every-day-life are:

– Incandescence – Light is emitted due to heat. This is how fire creates light and it’s also the way your average light bulb works.

– Phosphorescence & Fluorescence – Light is emitted due to radiation energy. Its how TV screens and fluorescent light bulb create light.

Glow sticks create light in the same way – lots of excited atoms banging into each other, releasing energy in the form of light photons. But, instead of using heat or radiation, a chemical reaction is used to excite the atoms in a material. The process is called chemiluminescence.

What is chemiluminesence when it’s at home?

You can find it all over nature. Fireflies and glow worms use luminescence to attract mates and the Anglerfish (that big scary fish in Finding Nemo) uses it to attract prey.

So how do glow sticks work?

In a nutshell, glow sticks give off light when two chemicals mix together. The glow stick itself is just a housing for the two chemical solutions used to create the reaction.

Most glow sticks are made-up of two separate compartments. A small, brittle inner container sits inside an outer flexible plastic container. Each of these containers holds a chemical compound.

When you bend the glow stick, the brittle inner container snaps and releases its contents to mix with the chemicals in the outer container. That’s when your atoms get all excited and start releasing energy in the form of light.

And because glow sticks use a chemical reaction within a sealed tube to create light, it makes them the safest form of light to use following a major catastrophe. In environments where the heat required for incandescent light may be dangerous, glow sticks are your go-to-guys.

So if you’re in the process of stocking your underground bunker in preparation for an apocalypse, we’ve got all the glow sticks you’ll need.

Typically, glow sticks use a chemical reaction between a hydrogen peroxide solution, and a solution that contains diphenyl oxalate and a fluorescent dye. It works like this:

The chemical reaction is irreversible, which is why glow sticks only have one use. But you can slow down or speed-up the reaction using heat.

Warm-up a glow stick under your armpit, and the extra heat energy accelerates the reaction. It (the glow stick, not your armpit) will glow brighter, for a shorter amount of time. Stick your glow stick in the freezer and you’ll slow down the reaction. The light will dim, but the glow will last for much longer.

However quickly or slowly it happens, eventually all of the diphenyl oxalate and hydrogen peroxide are used up by the chemical reaction. When one of these compounds runs out, the glow stick will stop glowing.

A range of different chemical compounds can be used to create chemiluminescence. Depending on the chemicals used, as well as which dyes are used, the glow stick will emit different coloured light.

If you want to find out more, check out this pretty graphic by www.compoundchem.com. It shows the different chemical compounds used to create various colours of glow sticks. 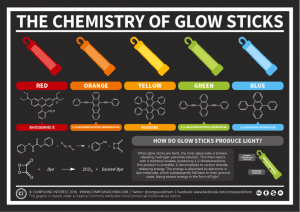 Our website is now online and open to the public so you can buy glow sticks from the online store now. We are still in the early stages of getting the site up and running; if you have any feedback or suggestions on what you would like to see here then we will be happy to hear what you have to say. The first products have been added to the site, so we are now taking orders. Don’t forget to keep coming back, we will be adding to the catalogue frequently, with some glow accessories being sold for a limited time only.

So, if you are looking to buy glowsticks or any other glow accessories such as glowstick necklaces or glowstick bunny ears, you can find them now on the shop page!