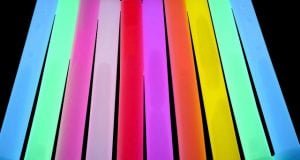 We’ve all cracked a glow stick and waved it around at a party or a gig, but did you know that glow sticks weren’t originally invented for fun? Here are a few interesting nuggets about the history of glow sticks.

Scientists were fascinated by bioluminescent light produced within nature by fireflies and other organisms. Research found that this natural ability to produce light without heat was made possible with a chemical compound called luciferin. Understanding the chemical components of luciferin enabled scientists to recreate this naturally occurring luminescence.

Edwin A. Chandross, a Brooklyn-born specialist in organic chemistry, is widely heralded as the original founding glow father. He happened across the chemical compound required to make glow sticks almost by accident when experimenting with luminol.

Whilst investigating luminol’s unusual quality of producing light rather than heat in chemical reactions, he discovered that peroxalate esters were vital to creating chemiluminescence. Over the course of just one day he carried-out experiments to establish exactly which compounds of chemicals would produce light most effectively. The winning combination was Hydrogen Peroxide coupled with oxalyl chloride and dye. This emitted a visible light, which glowed at just 0.1% of the strength of today’s glow sticks.

He didn’t realise it at the time, but Chandross had made a monumental discovery for chemical science. Any future experiments, patents and inventions around chemiluminescence were all based on Chandross’ initial discoveries.

When was the first glow stick made?

Although Chandross was the brains behind the whole operation, he did not patent the first glow stick.

Cyanamid eventually went on to sell this technology on to Omniglow, specialists in chemiluminescent products. Omniglow continued the research, using different combinations of dye to create chemiluminescence in various colours.

Various glow stick type devices were awarded US patents in the 1960s and 1970s, including:

– Chemiluminescent Signal Device invented by Vincent J. Esposito, Steven M. Little and John H. Lyons in January 1976. This is the first glow stick device to resemble glow sticks as we know them today. It had a glass ampoule inside a plastic tube filled with a second substance. When bent the glass ampoule released its contents and the tube was shaken to mix the two substances, initiating the chemical reaction that produces luminescence.

How do glow sticks work?

All of these glow stick type devices used the same initial principle first discovered by Edwin Chandross. That is, they all mix two chemical compounds to produce light.

Glowsticks are essentially just a chemical reaction in a tube.  Inside the plastic casing of a glow stick is a floating glass tube containing hydrogen peroxide. This glass tube is then surrounded by fluorescent dye. When you snap a glowstick you break the internal glass tube which allows the chemicals to mix. It is this mixing which causes the glow through the process of chemiluminescence

The images below show the components that make-up a modern glow stick: a plastic tube containing peroxide mixture and a glass ampoule containing flurophore. When the peroxide and flurophore are mixed together they produce a glow.

What were glow sticks used for originally?

Interestingly, one of the first patents for a glow-stick-type device was awarded to the US Navy in 1973. They quickly became an essential piece of military equipment with a vast array of uses, including emergency lights, target markers, landing zone markers and parachute markers.

Glow sticks don’t require batteries, they’re cheap to make and easy to dispose-of. They have a long shelf life, tolerate high pressures, are waterproof and weatherproof, and are visible from a mile off in the right conditions. Glow sticks are also non-flammable and non-sparking which makes them the only source of light that is safe for use immediately after a catastrophic event.

So whilst glow sticks have gained universal-renown for lighting-up festivals and parties around the world, they still retain an important function within the military and emergency services today.

When were glow sticks first used for partying?

The story goes that glow sticks first emerged on the gig-scene back in 1971, introduced by the son of a factory worker whose company was hired by American Cyanamid to assemble glow sticks. He and his friends hauled backpacks filled with glow sticks to a Grateful Dead concert at the Yale Ball in New Haven, Connecticut.

A few songs in, they started cracking open the glow sticks and handing them out to people in the crowd. Chaos ensued as amazed fans started throwing these never-before-seen glowing sticks around in the dark. It brought the whole gig to a standstill!

And the rest, as they say, is history. With the arrival of acid house and the rave scene in the late ‘80s and ‘90s, glow sticks took off. So that’s the history of glow sticks, and now we’re using them at clubs, parties and festivals all over the world!

3 thoughts on “The History Of Glow Sticks”

Leave a Reply Cancel reply
Have you seen our sale products?!
What our customers think of us
Trustpilot
Get the latest updates!