The School Summer Holidays are fast approaching, and we’re hoping for a warm and sunny one this year! It’s time to dig out those old camping chairs, the whistling kettle, plastic forks and get on down to the coast for some good old fashioned back to nature, outdoorsy, typically English holiday!

We think there’s nothing better than bundling a load of essentials into the boot of your car and setting off for a weekend of walking, swimming, hiking and being at one with nature and the great outdoors.

We want to make sure your all kitted out for your camping excursion, so we’ve come up with a list of 10 absolutely essential Glow Stick hacks for your expedition!

Glow in the Dark Tent Pegs

As soon as the sun goes down, it gets a little scary out there, trying to locate the toilet, whilst ensuring to not trip up over your own tent pegs and lines. We’ve got the perfect solution. Our 4” Glow sticks last for 12-24 hours, they’re perfect little tools for you to stick into the ground around your tent pegs, and even hang across the doorway to your tent so you can find your way back in! Here’s another little hack, if you’ve got a few empty beer bottles from last night’s BBQ, place the glow stick inside one of these, it will really help it make the most of its glow. 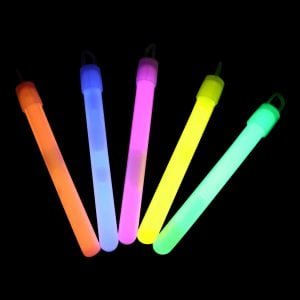 You could get the kids involved in creating a Glow Stick lit walkway to and from the toilet, so at night time they feel at little more at ease. You could also use Glow sticks to set boundaries around your campsite so the kids don’t go wondering off too far, or around the campfire to make sure they don’t get too close!

So you’ve spent the entire day venturing, and exploring, the sunlight’s starting to fade, it’s getting a little cooler outside and the kids are getting hungry! It’s time to get the fire going. But… Have you ever seen a fire burn vibrant colours of blue, green, purple and red before? You must! These Mystical Fire dust sachets create a vibrant colourful blend in the flames of your log fire, camp-fire, pit or BBQ. If used outside on wood burning fires, it has an attractive slow burn that lasts up to an hour. Who needs a TV? That’ll keep the kids entertained whilst the dinners on the go! Just make sure you use it safely and cautiously. You’ll certainly be the talk of the campsite.

Glow in the Dark Balls

Purely because they look pretty, these Glow in the Dark Balls are perfect for jazzing up your campsite, place them on the ground around some tables and chairs to create the ambiance for the evening. 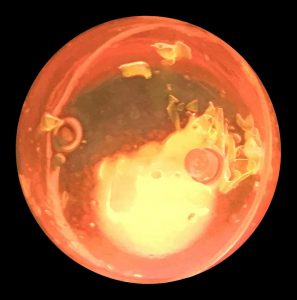 Get everyone working up a real appetite with some fun Glow in the Dark Outdoor Games. Glow in the Dark Hoopla is great for everyone. You can either use our 12” Glow sticks as targets or you can really be inventive, so firstly get everyone out on a scout for some big old sticks, (or small ones if you want the game to be a little more challenging), push them into the ground standing up right. Now attach some of our 8″ Glow Bracelets together using the connectors, to make it a little easier you can connect two or three glow sticks together. You can also set the ‘throwing line’ boundaries using some glow sticks. Away you go! Our Glow in the Dark Hoopla Pack has everything you need to get going! 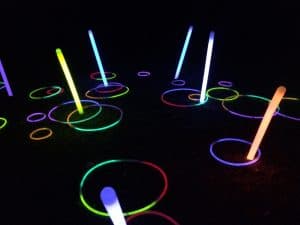 So the BBQ’s cranked up, and you’re cooking up a storm. Our LED Tea Lights are the perfect meal time addition. They look realistic, and you don’t have to have any worries if the kids are running around a little crazy, these LED Tea Lights remain cool to the touch, so there’s no danger of any little mishaps! Even the base is finished in a stylish glitter effect in Gold, Silver or Red! Because they’re LED they can be used inside or outside so it’s great for mealtimes with the family, or for a romantic evening in just the two of you! 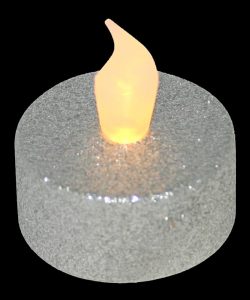 As an alternative to the LED Tea Lights are these funky Glow Stick Candles. Similar to your standard Glow stick these candles are so simple to use, just snap and shake! They come in Red, Blue, Green, Orange, Yellow and Pink, so you can take your pick. Place them around the campfire and get everyone involved in a good old fashioned campfire singalong!

Glow in the Dark Ice Cubes

Make your refreshing beverage a little jazzier with these vibrant Glow in the Dark Blue Ice Cubes. You can place them straight into your drink, or make up a big bowl of tasty punch (alcoholic or non-alcoholic!). You could even grab a few and throw them into an Ice cooler of Wine or Beer, they’ll definitely brighten up the campsite!

Glow in the Dark Cups

Glow in the Dark Straws

We really have got your covered when it comes to brightening up your drink! Add one of these cool Glow Straws to any drink, they’re sold in packs of six, and available in mixed colours so there’s enough to go around the whole family. They even last for up to six hours.

Be the talking point of the Campsite!

We hope we’ve given you some ideas and inspired you to venture out on your next camping expedition. Have fun!

Leave a Reply Cancel reply
Have you seen our sale products?!
What our customers think of us
Trustpilot
Get the latest updates!