Festivals are a chaotic and wildly fun explosion of mud, celebration, music, food, drink and friendship. They are also the most epic opportunity to wear the most outrageous clothes that would look absolutely insane in almost any other setting. Wellingtons and short shorts, floral macs, flower garland headbands, and of course: everything UV and glow stick. There’s never a bad reason to wave your festival light stick around like it ain’t no thang!

Some folks agree with the freedom of light stick fun so much, they’ve created some of the most insane light stick moments in history. While you wait to waft your own glow stick around in a muddy field to epic music (hurry up summer!), we’re going to give you a warm glow on the inside, with these 5 insane festival light stick moments:

You might not know that glow sticks actually started out as a military technology a very long time ago, but the public didn’t get to know about these incredible inventions until the 1970’s.

In Connecticut in New Haven, at a venue called the Yale Bowl, a Grateful Dead fan decided to make this gig ‘lit’ in a way no other gig had ever been before. The fan happened to work in a factory that finished off the assembly of glow sticks, for an American company. He stored hundreds and hundreds of sticks at his home over the summer, and on the night of the gig, got 6 of his friends together, and everybody loaded up backpacks with the glow sticks.

They struggled to keep the sticks away until the gig started, but managed to wait until a few songs into the Grateful Dead playing. You can get a feel for the style of the band on an actual recording of the band at the gig here. They then started handing sticks out and telling people to break it, shake-it-up and throw it. This caused absolutely chaos and astonishment as most people had never ever seen a glow stick before, including the band.

Soon, the sheer crazy sight of glow sticks flying around made the gig fall to a complete standstill. Soon after the frenzy had died down, the band started playing again but this time with glow sticks in hand. Jerry Garcia was known to say “I don’t know what these are, but they’re pretty f****** cool.” as he held some up to the crowd.

In 1997, at Great Went Phish Festival there was one stunning, epic and unforgettable occurrence that secured that particular festivals place in the history books, and that is the world famous glow stick war that occurred throughout the Harry Hood set.

Glow sticks and glow rings have always been a part of Phish events throughout history, but this was by far the most incredible spectacle that had happened so far. As the band settled into an improvisation section of their set, they requested the lights go out so everyone could enjoy the moon and the burning sculpture at the festival.

With the moonlight glowing down on the crowd, one fan decided to throw a glow stick, as did another, and another, until eventually the entire sky was filled with thousands of glow sticks flying around.

You can listen to a recording of the event here.

The visual spectacle of the glow sticks was further enhanced by the band shaping their music to the movement of the glow sticks. Fans still talk about that set today and how magical the combination of the fans, the moonlight and the glow sticks, and the music together, made something completely unique.

The Mighty Glow Stick Extravaganza Saturday 20:50 – 22:30By popular demand, the glow-sticks will be back this year,…

Posted by Staithes Festival of Arts & Heritage on Sunday, 4 September 2016

Staithes, a small fishing village, isn’t exactly the kind of place you would expect to get even a whiff of a glow stick. However, in September 2016, the beach of Staithes was well and truly lit. Perhaps in a slightly less thumping fashion than the examples we mention elsewhere in our article, but lit nonetheless.

Musicians and bands did indeed fill the Festival Of Art with music, but visually, the usual sculptures, crafts and glass creations that fill the village were overshadowed, by a beach covered in glow sticks.

Light artist Mich Stephenson decided to create a massive beautiful glow stick installation, which created light that formed shadows onto the cliffs where Sculptor Emma Stothard had sculpted dinosaurs, and Ste Iredale placed wooden carvings of a fish shoal emerging from the sea. Check out the awesome images of the spectacle here. It might not have been a ‘crazy’ moment, but we’re willing to bet the village of Staithes will never be that full of glow sticks lighting up the beach again.

4. Xylobands From Coldplay Integrate The Crowd Into Their Gig

Coldplay’s Xyloband wristbands, which they have been using since 2012, managed to make a very muddy Glastonbury last year into a very beautiful one.

During his set, the wrist bands play glow either red, yellow or blue all synched with the timing and music set by the band, so everybody wearing one gets to be part of the show.

The wristbands are like an advance on lighters which were usually lit during Coldplay ballads, with thousands in the crowd waving them to join in. These days, smoking is very much on the way out and many people don’t have a lighter on them anymore, and as you can hardly wave an e-cigarette around for visual effect, the band created Xylobands so that the crowd could continue to join in and enjoy being part of their set.

The sea of lights waving and darting around to Chris Martin’s beautiful voice, was certainly enough to warm up anyone in what was otherwise quite a wet and miserable muddy Glastonbury. Check out the complete Coldplay 2016 Glastonbury set here.

During an epic performance in 2010, Bassnectar made history by playing his hit ‘All Good’ to what was, one of the most incredible glow stick wars ever seen. Covered in UV green paint himself, Bassnectar (US DJ Lorin Ashley), he turns the decks, as the crowd wave their sticks in the air, hands splattered in UV paint, and as the bass drops, the glow sticks start getting thrown, thousands of them. Along with the heavy bass, the flashing stage lighting, the UV painted bodies and faces of the crowd, and the highly electric atmosphere, the glow sticks flying about are like an explosion of heightened emotion and excitement. Take a look at the full performance here, we challenge you not to move to the beat!

Get Festival Ready With Glowtopia

If you want to be part of the next epic glow stick war, get hold of our glow festival pack so that you can help the next gig you go to, get well and truly lit! 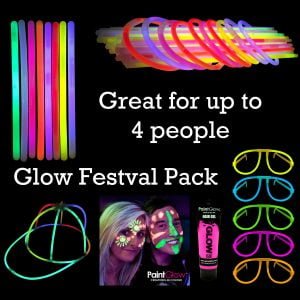