Take advantage of the Domino effect with this tile game of blocking and scoring.

Did you know there are loads of games you can play with a Domino set?
From Muggins to Spinner, Matador to Chicken Foot, you can while away the hours with game after game of different variations.
The most popular games are layout games, where players add their tiles to the layout in the middle of the table – in either blocking games (where the player attempts to place all their tiles) or scoring games (where the players gain points for placing tiles in certain configurations). Other games are based on card games such as the game “Sevens”.

This 28 piece dominoes set is made up of traditional black tiles with white spots. It comes complete with instructions inside a handy wooden box, making it an ideal party favour, lucky dip prize and present.

There are no reviews yet.

Be the first to review “Dominoes Game Set – 50% off! TO CLEAR” Cancel reply

Please don’t hesitate to get in touch with us on our contact page and one of our team will be more than happy to help.

What our customers think of us
Trustpilot
Get the latest updates! 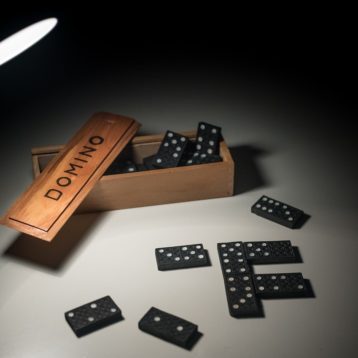